World in Conflict Tool for ArmA2 Wiki
Register
Don't have an account?
Sign In
Advertisement
in: WICT info 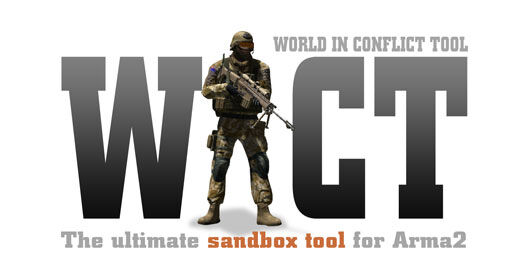 The WICT: World in Conflict Tool is set of scripts for ArmAII for infinitely creating dynamic battlefronts and ultimate free roaming experience.[]

I'm aware of the fact that the game World in Conflict (WiC) belongs to RTS and A2 is FPS. But there is one thing which they have in common and I admire the most - atmosphere.

The atmosphere should be similar to the situation in which you start a scenario in WiC and suddenly are switched to first person. Nevertheless you still have zones, points and reinforcements located within the map. To keep everything simple and in the spirit of free-roaming there are bases which spawn units and you can setup each base individually depending on which side controls it.

In WiC, in every single moment, you have a clear battlefront you push and push until you conquer a point - then hell starts again and you have to defend it. Thus my favorite mission was pushing enemy forces off the bridges and climbing my way up the hill through the small town, till I got to the church to find out Bannon had screwed up again and because of that I had to defend this place. Or when I was almost crushed, radio called and USS Missouri came to help. Or destroying submarines before they sail out. Or heavy gunships in France pounding down poor tanks. Oh boy. Atmosphere at it's best ...

And my most important goal was to change every location of the map into a battlefield. Not just randomly populating the world so units spawn nowhere and go nowhere. Or making predefined centers and spawn locations. The game WiC had the intense moments in which spawning didn't end because you didn't step inside some circle – but units didn't wander either. The battle was going on and on. Reinforcements on both sides. The action, the thrill. That is the matter of RTS.

On the other hand a lot of shooters these days are quite successful only because of two things: superb graphics and/or atmosphere. Sadly, the common case is they capture the action and present it with amazing visuals - but it repeats too often and normally they have multiplayer to cover this flaw – Call of Duty, Battlefield, Medal of Honor – your teammates are heroes who cannot die (if there are AI teammates, or you are just a Rambo), and once you memorize the chain of events, you can play it all the way through with closed eyes! AI has predefined cover places so first time you play you have the impression they are smart ("oh bastard flanked me"). Second time "come on, he just run at my bullet, I haven't done anything". That's why the only thing which reaaaally dies during the gameplay is the atmosphere itself. Very sad indeed.

Now think of free roaming which has thrilling action and great atmosphere, where every single time you play it is completely different, where enemies are trying to capture your base and areas like in WiC and you have moments similar to Normandy in CoD or armor battles in WiC, or ... And now imagine these situations happen all the time and are unscripted, unbiased, not-predefined ... and you are the soldier located right in the middle and experience a battlefield the way it's meant to be.

Furthermore WICT is easy to learn and provides anyone with a tool to create it's very own warfare module which can be played in SP, COOP and MP.

It is an honor for me to make this mod and call it WiC(T).

This module is possibly one of the best things to happen to ArmA! I love how powerful and customizable it is! Anyway I examined the demo and I think it was awesome and chaotic. Chaotic as in great epicness!!! I roll in with my lav to take the airport and just by random dice roll blufor rolled cobras which flew overhead on strafing runs countering the opfor reinforcements as 2 CDF bmp2 raced past laying waste to everything in their path. (…) The more I use this, the more impressed I am with how powerful this module really is.

Well, I think I just had one of my best FPS gaming experiences using this in Zargabad! It was an eerily believable battle.'' I've finally spent some quality time with it and got the basics, all I did was lay down 2 opposing bases and configured them relatively close with mostly infantry threw it on LAN and presto! Awesome!

Now where the hell did this one come from?!?! I've been looking for such war experience from the beginning of ARMA2's presence and this one seems to be around like what: a week? And seems to just hit the nail in the head...
Extreme potential when mixing this with some scripted stuff I guess although I've only played a bit with the example mission in the editor.
Thanks man!

I've just played more of this last night and it has bucket loads of potential! I don't know how you kept this one quiet until release.

I think WICT can be massive in the community. With a huge battle going on around you (with you in the centre) should be plenty for most people.

I've just snooped around, and the author has some promising ideas, and the demo looks promising too.
As far as I see it, he kind of wants to create a world where action will be around you (like in GTA), but governed by some deeper directions (as if someone invisible played a strategy game in the background). So I am expecting an FPS that would feel like you had been placed in a single unit in the WIC world.

no no no no NO.
Why must you put two of my favorite games together?
I love u for making scripts for ARMA II, but I hate you for fusing WIC with ARMA II.
I have this love hate relationship for you LOL.
Oh well, nice tool and scripting on the other hand. Keep up the good work. All we need are some scripts for better armor on tanks. And more tanks. Like how WIC has a Light Med and Heavy option.
P.S : Do you play WIC?
(…)
That’s one Crazy atmosphere you like to be in my friend, but I do see you point on why you did this. And after hearing it, it’s nice to see this in ARMA II. Keep it up and good luck to you.

The tool seems really flexible. For example, you don't necessarily need to have both sides' bases spawning troops; you can have WICT start half way through a mission, adding a dynamic element to otherwise scripted gameplay. You can have the bases as being invisible to the player and just use them as a way of guiding the AI to attack in a general area of the map you want. Performance is very efficient.

thx ArmAIIholic for making this release ... WICT becomes bigger and better with every update, it's nearly as an "editor for the editor", so perfect for family dads like me who don't have so much time for detailed scripting ... it's like playing LEGO with my kids :-)

I love this mod! It’s a lot of fun to have giant tank battles with one base at one end and another at the other with scandist set to like 100k. Then battling across the map, with massive air battles overhead of course.

A2H, This v2.32 is absolutely fantastic. (...) Anyways, it is kind of a childhood dream coming true for me: I've always wanted to play a "shooter" game the way it is possible now. ARMA2 vanilla was close enough, but this mod is THE solution... So thanks again.

Community content is available under CC-BY-SA unless otherwise noted.
Advertisement